Heavenly Stitches is a full service quilting and sewing machine shop. We carry quality fabrics, BERNINA sewing machines and all sorts of wonderful notions. One of our driving goals here at Heavenly Stitches is to create a place where people can come and have a community. To further that goal we offer many classes and groups. Many lasting friendships have started here. Another goal is to make your crafting life fun and satisfying. We are always willing to help you through the sticky spot in your latest project. Heavenly Stitches came about as Heather's 'retirement' plan. After spending many years as a Registered Nurse and a Certified Nurse Midwife Heather was ready for a change. Heather planned for approximately three years prior to opening, including attending the International Quilt Market and Festival in Houston. She found the perfect location in an empty little church just off of highway I-75 and set about purchasing it. The church needed quilt a bit of TLC (just ask Shana about spending a week on a lift with a power washer and paint sprayer), but was eventually brought back into good condition. Heavenly Stitches officially opened June 3, 2010.

We added BERNINA sewing machines in the fall of 2018. To do so we had to remove our yarn stock. When we decided to add sewing machines we did lots of research and it wasn't an easy decision. BERNINA was the company that most closely aligned with our own goals and mission. They are still family owned after more than 125 years. They have many programs to support in-store education (to better help build the sewing community) and their manufacturing quality is second to none. The wide range of machines, from the Simply Red B215 to the impressive B880 Plus (it threads itself), are all manufactured with the same high quality requirements and fit sewists of all skill levels.

Heather has been in Lima for 30+ years. She started out as a Registered Nurse and received her MSN in Midwifery. She practiced for 18 years and then decided to have a change of scenery. Heather has sewn and done various needle crafts her entire life, but her love of quilting came when she was introduced to the art by a friend more than a decade ago. Her love only grew and she acquired a long arm machine that resided in what was Shana's room. She was dreaming about what to do after retirement and noticed a distinct lack of quilt shops in the Lima area. Whilst planning and plotting she brought Shana in to help.

Shana is Heather's daughter and was born and raised in Lima. Shana has held several jobs in the healthcare field and decided that a distinct aversion to blood demanded a different life path. When Heather proposed opening a Quilt Shop, Shana was on board. Then came the day when Heather called and said that the Yarn Sales Representative was coming for dinner.  Shana had been introduced to quilting by Heather, but had not done nearly as much. She had, however, knitted for quite some time (though not skillfully). After learning that the shop was also going to carry yarn she decided that she needed a self taught crash course in knitting techniques. After much study and many books she has become the resident Knitter who Quilts. With the pivot to carrying BERNINA sewing machines instead of yarns, Shana has become our resident machine technician. She also manages the marketing through website maintenance, all of our video work, and our graphics for both digital and print ads.

If you have been in the shop at all, you know we have resident shop dogs. 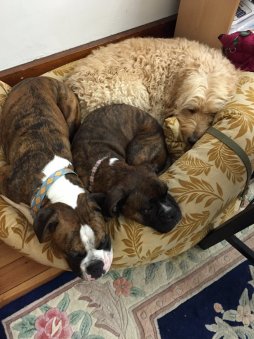 Cooper is an 13 year old male Goldendoodle (50% Golden Retriever, 50% Standard Poodle, 100% Love). He tends to be the most vocal, but only because he thinks that barking at people will get them to come pet him. Cooper lives with Heather and has been at the shop since the beginning.

Sully (not pictured) is Cooper's little brother. He is not quite two years old. He is much smaller than Cooper, but is also a goldendoodle. He joined us in the fall of 2019 and, unfortunately, missed out on some of the good socialization because of the shutdown in 2020. He's still learning to be a real dog. Sometimes he barks and occasionally he jumps, but he has become much better over the summer. He is rarely found up front (because of his jumping habit).

Apollo is a 8 year old male Boxer. He is our shy boy and likes to sniff people, but isn't always keen on being petted. He's much more sociable than he used to be. Apollo has been with us since he was 12 weeks old (and coming to the shop nearly every day!).

Ahni is a 8(ish) year old female Boxer. She is a rescue dog from southern Ohio. She was abandoned with two other dogs when her family moved out of their apartment. Thankfully, a neighbor took them to the local humane society. Shana found her on Petfinder.com as a brave companion for timid Apollo. She has been with us since she was approximately 1.5 years old. Apollo and Ahni live with Shana.

The dogs are generally kept behind the counter or in the back of the shop. They can be occasionally found wandering around inside and do like to come greet people. We make an effort to keep them from being over enthusiastic (they are not jumpers) and will certainly move them to the back of the shop if you are uncomfortable around them. We would not have them at the shop if they were not well behaved.